There are tremors that are becoming more agitated in the Middle Kingdom thanks to Xi Jinping's insistence on zero-Covid.
In the last two days videos have been posted on Twitter showing workers at a Foxconn factory in Zhengzhou, Henan province. There are scenes of them armed with metal sticks clashing with "dabai" or police in white hazmat suits with riot shields, and the workers are for the most part holding the line.
The workers are protesting the working conditions and pay in the biggest factory that makes iPhones.
Last month there was the threat of a lockdown in the factory because of a Covid-19 infection and many workers fled with suitcases, literally walking hundreds of kilometres to get home. They could not take public transport because their phones would have a warning of a possible infection.
The Taiwanese factory then tried to hire more workers, but apparently the new ones found their pay was changed when they got there. One worker, Li Sanshan said he was lured by 25,000 yuan (US$3,500) for two months' of work. But when he got to the factory, he found out they would have to work an additional two months to get the 25,000 yuan.
"Foxconn released very tempting recruiting offers, and workers from all parts of the country came, only to find they were made fools of," Li said.
The company claimed it was a "technical error" and offered an apology. But Foxconn is now struggling to fill iPhone14 orders.
Meanwhile the World Cup has kicked off in Qatar, and despite its reprehensible treatment of migrant workers, banning homosexual acts and sexist treatment of women, it has allowed the thousands of football fans in the stadiums to watch the matches without masks.
When the Chinese turned on their televisions or phones to watch the matches, they were shocked -- shocked -- to see no one masked up.
"Some people are watching World Cup matches in person with no masks, some have been locked at home for a month, locked on campus for two months without even being able to step out the door," a Guangdong-based user on Weibo wrote on Wednesday.
"Who has stolen my life? I won't say."
Another Weibo user from Shaanxi province said they were "disappointed" in their country.
"The World Cup has allowed most Chinese people to see the real situation abroad, and worry about the economy of the motherland, and their own youth," the user wrote.
Another questioned China's zero-Covid policy and if China was "on the same planet" as Qatar on the Weibo platform before it was censored.
The World Cup matches are broadcast on state broadcaster CCTV, which also gives a lot of negative information about the rest of the world, claiming they are struggling with the virus.
Now the Chinese feel like they are made fools of too...
at November 24, 2022
Email ThisBlogThis!Share to TwitterShare to FacebookShare to Pinterest
Labels: CCTV, China, Covid-19, Foxconn, Henan province, iPhone, mask, migrant workers, protest, Qatar, Twitter, Weibo, World Cup, Xi jinping, zero-Covid, Zhengzhou

Palm Springs: A Visit to the Zoo

This giraffe gets free food from humans Yesterday we visited The Living Desert Zoo and Gardens in Palm Springs and we enjoyed our time ther... 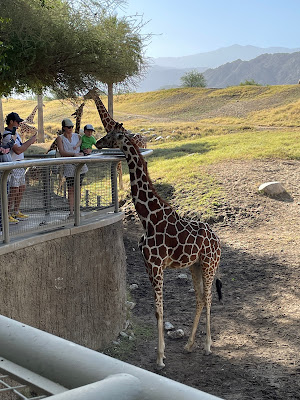