Hours after retired Cardinal Joseph Zen appeared in court to answer to the charge of not registering the 612 Humanitarian Relief Fund with the government, he held mass at the Holy Cross Church in Sai Wan Ho.
Many who came to see him dismissed the charge against him.
"We of course must respect the rule of law but wielding law as a weapon to oppress is by no means the goal of rule of law," a woman named Louise told AFP.
In his sermon, Zen again criticised a deal between China and the Vatican in 2018 which allows Beijing to nominate bishops for the pope's approval, calling it "unwise" despite being made with "good intentions".
The agreement was renewed in 2020 just as China was accused of suppressing Uyghurs in Xinjiang and Christian believers of underground churches.
At that time two years ago despite the pandemic, Zen traveled to Rome in the hopes of speaking to Pope Francis and persuade him not to renew the deal, but was not even granted an audience with the pope.
Vatican analyst and papal biographer Marco Politi says: "The Holy See does not want this thread of dialogue and communication [with China] to be broken. "It is clear that China is in a position of strength and the Vatican in a position of weakness."
After Zen's arrest on May 11, the Vatican has been relatively silent, and Pope Francis said he was "attentively" following the "often complex" life of Catholics in China without directly referencing Zen.
But up until this point, veteran Vatican commentator John L Allen said Zen had become "increasingly marginalised" in the Francis papacy.
"Had China done nothing, Zen likely would have remained inconsequential," he wrote on the Catholic website Crux.com.
"Now, however, Francis can't afford to ignore Zen, because his arrest -- and whatever may come next in terms of a prosecution and even possible incarceration -- is destined to generate sympathy and activism on Zen's behalf all across the world."
Pope Francis may have wished he had granted Zen an audience, but it's too late now.
Either way he cannot ignore the seriousness of the situation Zen is in and pray that the rule of law will have mercy on him...
at May 25, 2022
Email ThisBlogThis!Share to TwitterShare to FacebookShare to Pinterest
Labels: 612 Humanitarian Relief Fund, Cardinal Zen, Catholic, Covid-19, Hong Kong, Pope Francis, Rome, Uyghurs, Vatican, Xinjiang 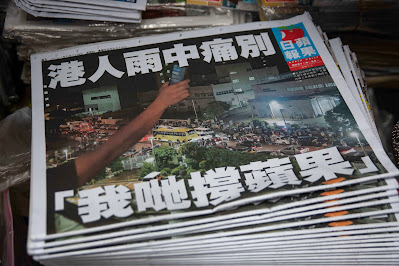