In the past year, 113,000 people have left Hong Kong, either because of the never-ending pandemic restrictions, or because of the increasingly repressive environment, but Beijing refuses to acknowledge this drop in the population.
On Tuesday Huang Liuquan, deputy director of the Hong Kong and Macau Affairs Office instead said it was a number of factors which caused the decline.
"Hong Kong's population drop is caused by various factors and there is no way to suggest that it is a result of an emigration wave," he said, adding there were no official figures by the Census and Statistics Department showing the number of residents who have moved abroad.
He also quoted a local government official who said Hong Kong was an international city and that the population was "highly mobile".
"From the population data announced by the city government and its spokesman's explanation, it is inappropriate to describe it as a wave of emigration that has emerged in Hong Kong," Huang said.
Then how do you explain the population drop to 7.29 million, down 1.6 percent from a year earlier, and the biggest drop since records began in 1961?
In addition, the labour force decreased to 3.75 million in June, the lowest figure in nearly a decade, and a 3.49 percent decline from the same period last year.
Huang can spin it all he wants, but it is clear to not only Hongkongers, but also to the United Kingdom, Australia, the United States and Canada that they have left for a better life. Why else have young families sacrificed good jobs for their children's education, while young graduates and professionals see no future in Hong Kong?
But the more Huang and other Chinese officials say it, they hope their mantra will become fact.
However numbers do not lie...
at September 22, 2022
Email ThisBlogThis!Share to TwitterShare to FacebookShare to Pinterest
Labels: Australia, Beijing, Canada, Census and Statistics Department, Covid-19, emigrate, HKMAO, Hong Kong, Huang Liuquan, United Kingdom, United States

Patriots Come out to Party

A sea of red flags for National Day are hung around the city It's October 1, National Day, and all the patriots are out in force to cele... 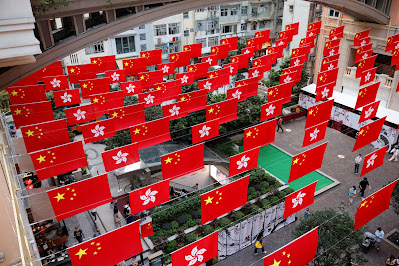